January 14, 2017. It is the day Pickles Petunia Parise came into this world! Since she is no longer with us, the best we can do is wish her a Happy Heavenly Birthday! Although she is not here, we do celebrate her life, as short as it may have been. It is our belief that Pickles entered our lives for a reason. Having lost her so suddenly prompted the creation of The Pickles Project. When life hands you Lemons, make Lemonade and don’t forget to give your dog, dog biscuits! 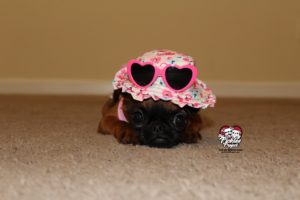 We only had Pickles for a short time. In April of 2017, my husband Andrew and I adopted a wonderful little Brussels Griffon named Pickles. She was very tiny weighing in at only 6.4 Lbs. What she lacked in size, she certainly made up for in personality!

As tiny as she was, Pickles was stubborn and a bit tough to train. She suffered from severe separation anxiety as well. Amazingly, she found her way out of any crate we put her in! Her nickname became ‘Hairy Houdini’! In a short time, she settled in. She soon became a great student and seemed to love training! But we noticed something off about her. Something was just not right. both my husband and I became worried. We had her checked at our Veterinarian as well as a specialist (here in Georgia). We were told she was ‘fine’. They could not find anything wrong with her, no matter how we insisted.

Our Veterinarian cleared her to put her under anesthesia to have her spay. Unfortunately, she did not survive the surgery. I can still hear her words to this day. “She died, she didn’t make it.” It was heartbreaking.
I had to call Andrew to come home from work. I was in shock, I couldn’t breathe, and I was hyperventilating. So much so, I actually made myself sick. I needed to see her, but I could not drive. I was just too upset. He was able to get away and picked me up. We drove over to the Vet’s office. 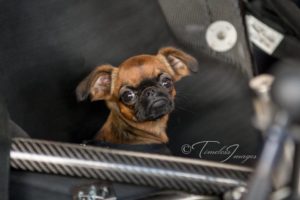 We were able to hold her one more time. She was wrapped in Andrew’s t-shirt that we dropped her off with. It was her favorite shirt to sleep with. We said our final goodbyes. Neither one of us was prepared for this. This was not supposed to happen. As her death began to set in, I had more questions than answers.

Where to go from here

After talking (and a bit of arguing) it over, Andrew and I decided to do a Necropsy on Pickles. It would not bring her back, of course, but maybe a bit of knowledge could keep this from happening again. The hope was that we could possibly help another pet owner avoid the heartwrenching experience we just had.
At first, we were told of a Cerebral Hernia that she was apparently born with. To our understanding, that was not what killed her. It turns out she had a parasite (Visceral Larva Migrans) that was never detected (and was long gone from her system). This parasite had ravaged her major organs (by forming legions on them) and left them severely compromised. Therefore, her little heart could not withstand the anesthesia.
Placing blame crossed our minds in the beginning, purely out of anger and heartbreak. In the grand scheme of things, where will that get anyone, anyway? The blame game would not have brought Pickles back. Instead, here we are; https://thepicklesproject.com/
The best we can do is honor our sweet girl by creating a Pet-Friendly website, with tons of useful information. I hope you will join me on this journey. Let’s chat and learn more about pet health, nutrition, safety, bereavement, and EVERYTHING pet related, together!
Thank you for reading!
Dina 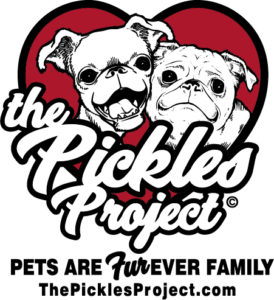 To some, those of us that do not have Human Children are discounted. Pet owners are not considered ‘parents’. I’m here to say, I beg to differ. A pet can live upwards of […]

Holidays are always a time to gather with family and friends. Holidays in the summer usually consist of barbeques and outdoor activities. The 4th of July also has the added excitement of colorful fireworks […]

What’s in a name? Between August and November damaging winds and floodwaters, that’s what. We as pet owners always need to be prepared for the worst. Our pets are our family and need to be […]